THE NORMAN CONQUEST AND THE DOMESDAY BOOK

William was the Duke of Normandy: he ruled giving land the barons in return for military service. He claimed English crown, so he gathered an army of about 8000 warriors, He fought against King Harold at Hastings, in 1066. Harold was killed by Normans, the Anglo-Saxons escaped to woods and the Normans won the battle. This events marks one of the most important moments in English history: in fact there was a deep change in culture, politics and society.

As many Anglo-Saxon noblemen died in Hasting's battle the feudal system was established in England: the French barons received land by the king and gave him military service. The work of the peasants guaranteed food and in this way there was peace and prosperity for all. 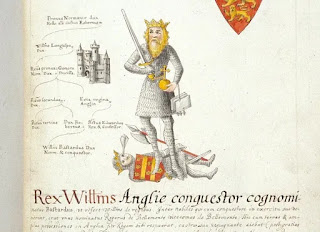 William the Conqueror wanted to create the Domesday Book, a book in which he could find all the information on the country he ruled. There were recorded the annual value of every piece of landed property, the resources in land, manpower, and livestock. The book was also used to collect taxes.

The Normans replaced English with French as the language of the elite. Latin remained the main language in legal and ecclesiastic context, while English survived in everyday speech.